I’ve stood on three rooftops in Vancouver, and two of them in this past week. That’s quite a lot considering I just moved to Vancouver about a month ago.

When I studied in London one summer, I took a course called Literature and Place. Our introductory readings included excerpts from French theorist Michel de Certeau’s The Practice of Everyday Life, and in particular, his chapter called “Walking in the City.”

Like most French theorists, de Certeau has obscure theoretical concepts for what are actually pretty simple, everyday things. His main distinction was between strategies and tactics and the two groups of people who use them. Governments, institutions, and other dominant power structures are what he calls the producers of strategies. Strategies are ways we are taught to read and interpret the city.

Where there are producers there are consumers, and that includes the rest of us individuals who fight back (consciously or not) against producers’ strategies with tactics.

This all sounds really abstract, but de Certeau breaks it down into some practical examples. Strategies include maps that City planners make to present the city as an organized, unified whole. Buildings also function in this way – particularly skyscrapers or other high-rise towers that offer the visitor or tourist a synoptic view of the city that is easy to digest.

Consumers fight back against these strategies through tactics that can never be fully predicted by the producers. Jaywalking is a tactic because it goes against the official grid that City planners have mapped out—especially in a quintessential grid city like New York. Locals know the shortcuts and the detours. They can cheat the producers. It’s like one big urban battlefield. I think de Certeau’s point (at least an oversimplified version) is that the practice of everyday life in the city involves this tension between producers and consumers.

Strategies are especially effective on tourists. I can speak from example. Whenever I’m in a new city, I seek out high places early on in my trip to give myself a bird’s eye view of the place.

Take New York. I visited the Empire State building on one of my first nights there. In London, there’s the London Eye, whose name even alludes to this panoptic vision of the city. Manchester has one too. In Ottawa, there’s the Peace Tower on Parliament Hill. In Toronto, the CN Tower. In France, the Eiffel Tower. All these places are especially marketed for tourists, and I think they work because when you’re new to a place, you’re vulnerable. You often don’t know the language, the customs, or the way around. Seeing the city from above gives you a sense of control, even if it’s illusory. You get a feel for where neighbourhoods are in relation to other neighbourhoods, where landmarks are located, and a sense of the size of things.

But this perspective isn’t the “real” city. The real city is experienced at street level where the consumers have a local knowledge of how to get from A to B, which stores are open and when, what streets to take and which ones to avoid due to traffic, construction, panhandlers, or who knows what reason, and a whole list of other insider information.

I feel like I’m in the transition stage between being a visitor and a local in Vancouver. Standing on two rooftops this week, I was struck by how very different Vancouver is than any other city I’ve lived in or visited. Vancouver is the only one that doesn’t have an open-to-the-public tower or high-rise offering a panoramic view of the city (at least not to my knowledge). Vancouver is so private. We love our million dollar views but we keep them to ourselves.

I would never have stood on the rooftop of the Sheraton Wall Centre in downtown Vancouver this week had I not been part of a launch party for a condo website I write for. The concierge had to swipe a card in the elevator so I could even access the 35th floor. The other rooftops I experienced in Gastown and False Creek South resulted from knowing someone who lives in the buildings. 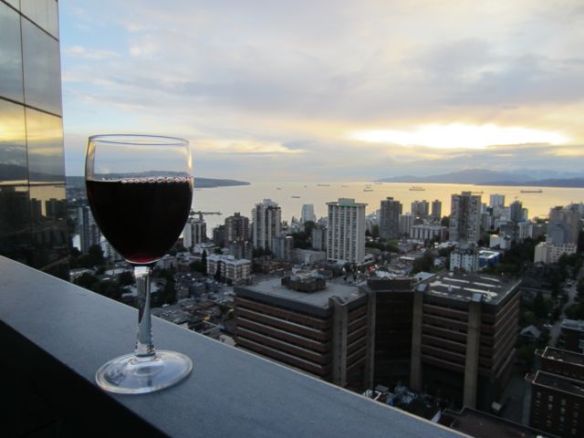 Needless to say, I don’t take these views for granted, especially since they’re so hard to come by when you’re new to Vancouver. And I’m not going to deny it—I love the view from the top. I may be participating in producers’ strategies by relishing these confidence-boosting vistas but I cannot help but equate rooftops with happiness. There’s something about physical height that simultaneously heightens my spirits. I feel on top of the world.

What’s your strategy/tactic when you visit a new city? Do you seek out high places or do you stick to the streets?

I have a confession to make. After I finished my Master’s degree in English Lit, I didn’t pick up a book for a long, long time. Probably a month, which is a long time when you’re used to reading at least two books per week. I had no desire to read, and this bothered me greatly. After all, this was the time I was supposed to enjoy reading whatever I wanted (thankfully I am at that point again – I credit Suzanne Collins’ Hunger Games trilogy for this renewed interest).

But before this renewed interest, I was talking about my apathy towards literature with a friend a few months ago who did not seem surprised at all by this, and, in fact, thought it was normal. In response to my anxiety over not reading, he simply said, “So don’t read. Paint.”

This was a novel idea (no pun intended), and one the intrigued me because it’s not what I do. And I didn’t do it right away. Yesterday, however, a combination of curiosity, encouragement, and the desire to try something new produced this: 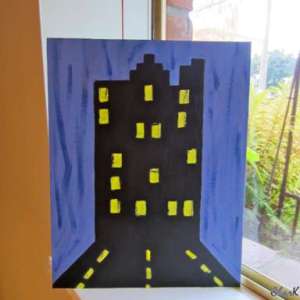 Not anything spectacular or post-worthy, I know. But the important thing is not so much how or what I painted than the fact that I painted. I painted! I I haven’t picked up a paintbrush since taking an art class in Grade 9. That’s ten years ago now. It makes you wonder about the things we give up because of time and circumstances, and which time and circumstances in our lives lead us back to certain things.

Since I painted an urban scene (surprise surprise), I may as well talk a bit about cityscapes. And here comes another confession – I’d love to say the picture was my own idea, but in truth, it was an ad for something I saw in a New York subway station. What drew me to it was its simplicity of streets seamlessly morphing into skyscrapers. It juxtaposes the two most prominent architectural elements of cities: its streets and its buildings. One could say that streets are horizontal buildings and buildings are vertical streets.

Two Vancouver architects, Bruce Haden and Joost Bakker, are playing with these ideas. They are taking the traditional vertical tower and literally flipping it on its side to produce a horizontal condominium and office tower development on the eastern end of False Creek. They call it the “bridge form – a tower laid horizontally across two smaller supporting towers.” Check out the article here in The Vancouver Sun.

I’m trying to imagine a city of skyscrapers without streets: Trees without roots. Helium-filled balloons with the strings cut. Height without depth. Towers of Babel disconnected from earth in their effort to ascend to the heavens, to achieve man-made immortality. Le Corbusier’s Radiant City of concrete monoliths.

Now what would it be like to have a city of streets without skyscrapers? Visual tedium. A bird that never left the nest. Roots but no wings. Breadth without height. Nothing to mark the distance and make the distance matter. Suburban sprawl as far as the eye can see.

Taken to their individual extremes, skyscrapers and streets don’t work well on their own. But put them together and there’s beauty in the balance of multiple heights and distances conducive to mixed-use spaces, neighbourly interaction, and visual interest.

Speaking of visual interest, my friends have heard me say that as much as I love Victoria, I am not a fan of its skyline. I mean, look at it – nothing of prominence to write home about:

Some friends tell me they like Victoria’s small scale heritage buildings with their restricted heights that give the city more light and which makes them feel less like forgotten pedestrians walking through a concrete jungle. I get that, but I can’t help comparing skylines and being drawn to cityscapes like this: 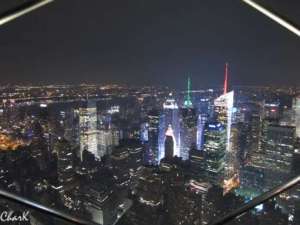 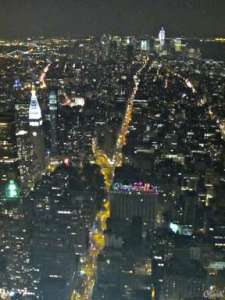 Here’s an artistic rendering of the Manhattan grid that emphasizes both New York’s streets and buildings: 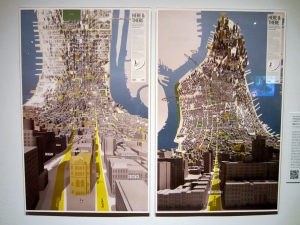 From MoMA's "Talk to Me" exhibit

The paradox for pedestrians (or maybe just tourists) in New York is that you’re stuck looking in two directions – up and across. You want to look up because the height of the skyscrapers is so powerful and magnetic, but you can’t because you also have to keep your eyes on the street and focus on getting through the grid – and the crowds.

Anyway, those are just some thoughts provoked by a simplistic, three-building skyline I painted. If any of you are similarly tired of your same old, same old, or are looking for something new and creative and cathartic to take up in the New Year, I highly recommend painting. And if you’re sick of painting, well, try reading.