The Vancouver International Film Festival (VIFF) is going on right now, and having never attended before, I decided to check it out.

Sarah Prefers to Run (Sarah Préfère La Course) was my first film festival experience, and it was a good one. Directed by Chloé Robichaud, the 97-minute film tells the story of Sarah (Sophie Desmarais), a 20-year old middle-distance runner recruited to McGill’s prestigious track team, who, quite simply, prefers running to anything else. She can’t answer the question what she would do if her legs got cut off and she couldn’t run. She can’t conceive of a world without running.

I really enjoyed the after-film part. If this is how every film festival is like, I can see why people go. It’s like having the author of a book you just finished reading available to answer all your questions. It’s not like Chloé Robichaud gave “answers” as to how to interpret certain scenes—she intentionally leaves it ambiguous for viewers to decide—but it is helpful to hear some of the motivations and ideas behind the movie.

An audience member asked about the metaphor of running and how it’s often used negatively, as a running from. While Chloé affirmed this interpretation, she also mentioned how running can be a running towards. Sarah is happiest when she’s running. And so, while the ending is rather abrupt and ambiguous, it’s more hopeful than it is unhopeful. Sarah is doing what she does & loves best, although the downside to this is that she doesn’t seem to care for people as much as she cares for her sport. That balance between going after what you love and navigating the downsides that can result from such an intense focus is what makes the film feel like a coming-of-age story. 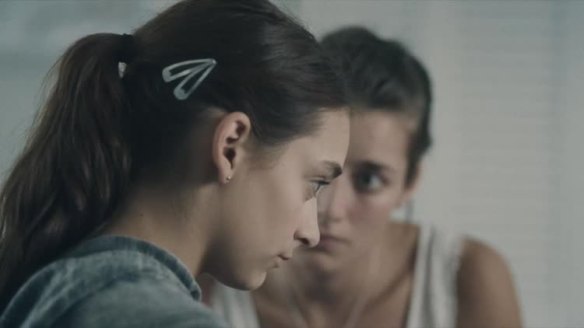 Sarah’s passion for sport is not unlike an artist’s passion—relentlessly pursuing what she loves despite the reservations of family (her mother) and her own better judgment of marrying her best friend simply for financial reasons. I’m going to quote from Tim Grierson because he describes this artistic similarity in his review better than I can:

It wouldn’t be a stretch to compare Sarah’s passion to that of an artist’s, throwing away everything else in the focused pursuit of one’s calling, in part to block out the rest of the world that’s so confusing and painful. There are plenty of artists whose drive didn’t result in a happy ending, and what makes Sarah Prefers to Run so touching is that we’re not quite sure what the resolution will be for Sarah. She isn’t, either. But she just keeps running.

While Sarah is top of her field in her running accomplishments, it’s interesting that we never see her win a race. It’s always told after the fact, or there’s a shot of her recovering her breath afterwards, but the emphasis is not on the results of her running. It’s on the act of running itself, and the psychology of who she is when she’s in that space. 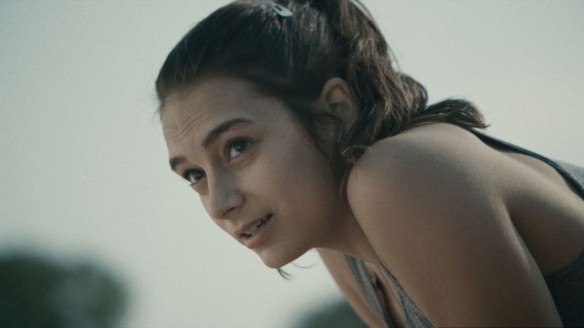 But who she is is hard to figure out because she’s a character of minimal dialogue, and so a lot depends on her body language, especially her eyes—which Sophie Desmarais does a great at communicating through—but sometimes I just wanted more words.

Chloé said she could have chosen another activity for her character to pursue, like Sarah Prefers Administration (the very word puts you to sleep) but it certainly doesn’t have the same cinematographic qualities that running has. From the opening sounds of feet scampering across the track and the inhale and exhale of breath, the audience is invited into Sarah’s natural rhythm—also natural in the sense that running doesn’t require any equipment. Just body, breath, and ground.

In keeping with the fact that running is Sarah’s life (yet also has the potential to be the opposite), it makes sense that most of the film contains scenes of Sarah running or training. At the same time, she’s a new undergraduate student and, apart from one party and one on-campus interview for the school newspaper, the whole “first-time-away-from-home/freshman-at-university experience” is lacking, which is a pretty significant part of her new life. We don’t even know what she’s studying, and I was a little surprised to see no shots of McGill’s beautiful, European-style campus or even the outdoor track, Molson Stadium. All the running takes place in the fieldhouse. 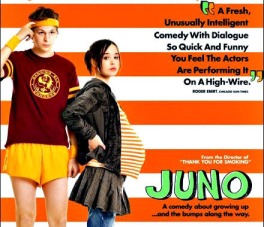 The film brought back memories of Juno in terms of Michael Cera and his squadron of yellow short shorts teammates, as well as the way in which both Juno and Sarah refer to the fact that they did things “backwards.” And yet, in the last shot, Sarah’s running forward. Decisively. Because that’s what she knows how to do.