This past week, I celebrated a birthday—a wonderful birthday with celebrations that spanned over several days with various friends and family, topped off with a surprise day trip to Seattle on Saturday! 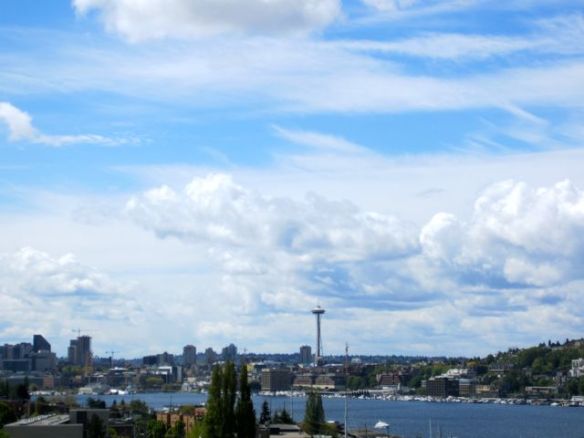 Space Needle coming into view from the car window

I was thrilled. I’m a little embarrassed to admit this, but even though I grew up around the Vancouver area, I’ve never been to Seattle before. Never! So in my late 20s, I finally experienced the big city just south of the border, which apparently also gets a lot of rain. 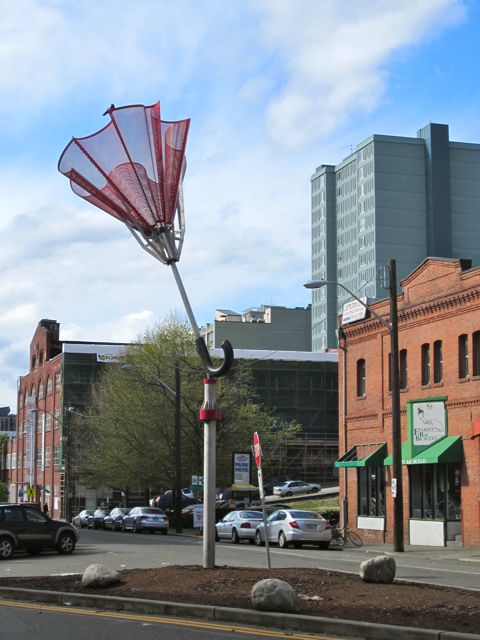 My boyfriend and I spent the majority of the day wandering around Pike Place Market that is home to hundreds of merchants, from farmers and fishmongers to antique dealers and craftspeople. It reminded me of Vancouver’s Granville Island, but on a much larger scale. 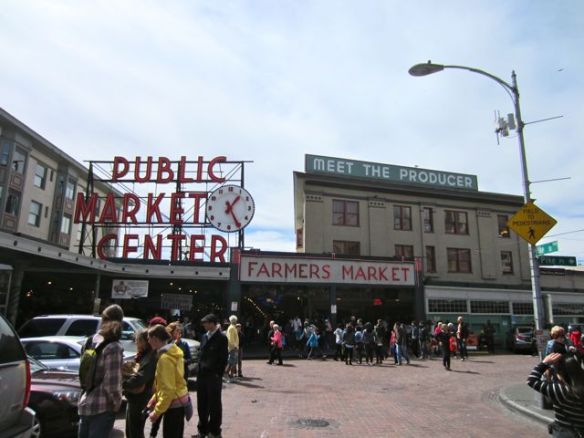 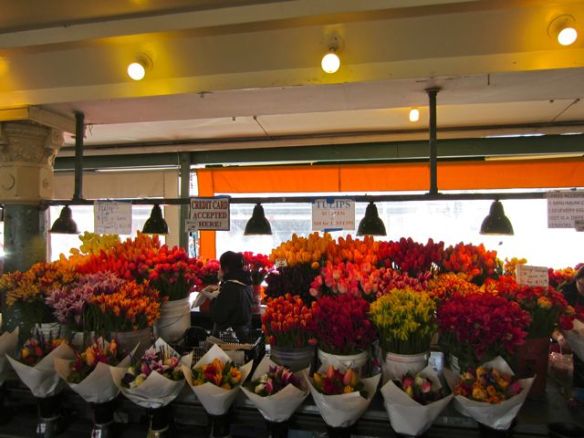 Tulip time. There were whole rows of tulip booths 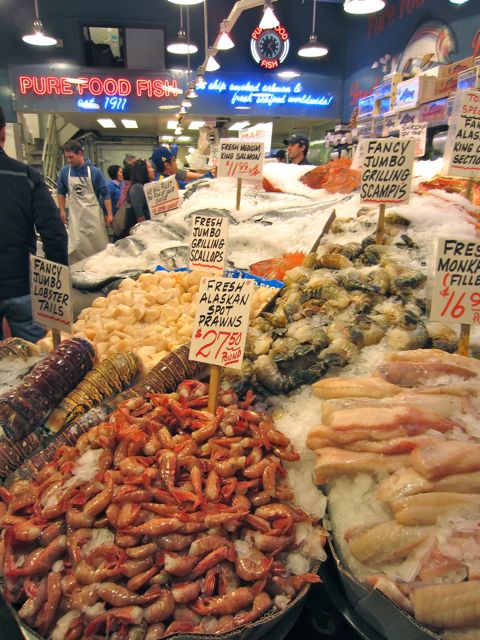 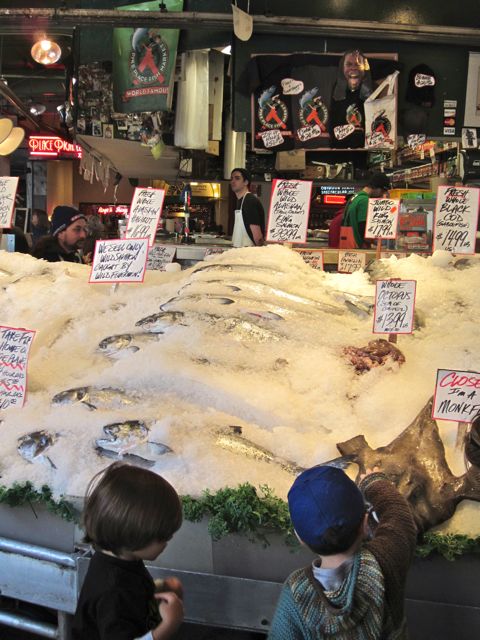 These boys loved touching the fish and then running away, squealing with fright

The stalls are set up in long, narrow corridors with a “Down Under” section below street level. Some stalls are inside, some are outside, and some seem a little half and half. The market is over a century old (dating back to 1907) is one of the oldest continuously operated public farmers’ markets in the United States. 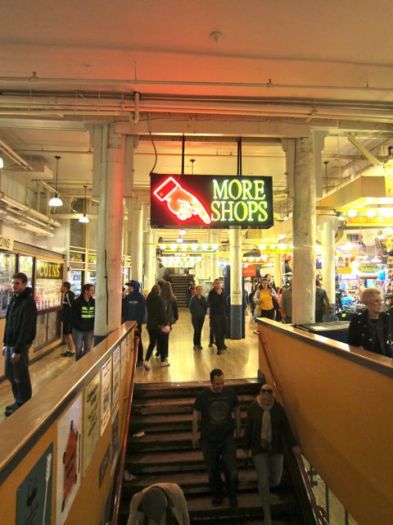 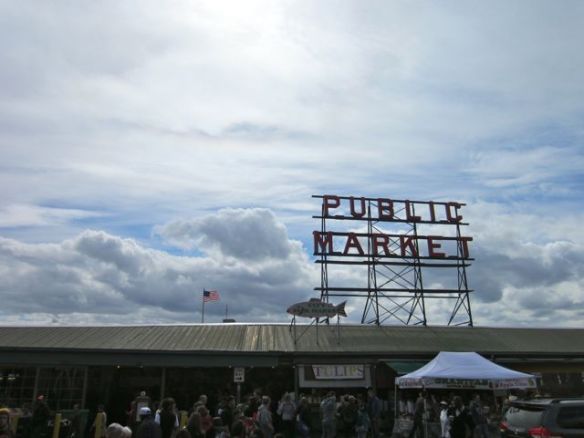 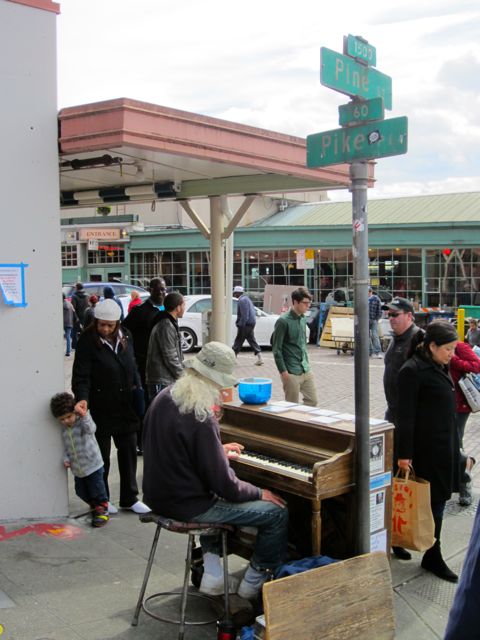 We stopped for lunch at a seafood place called Lowell’s Restaurant & Bar where I ate these delicious fish tacos stuffed with halibut. 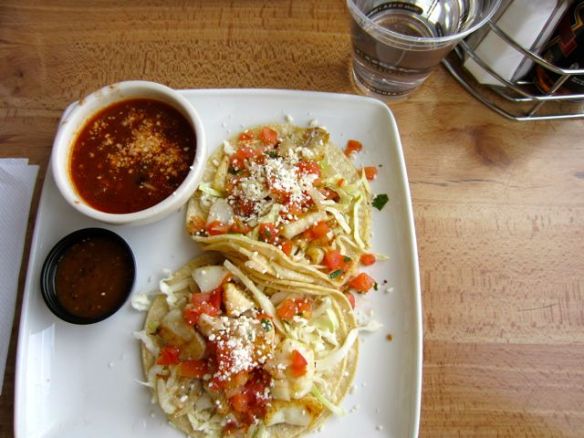 The view was lovely, overlooking the Olympic Mountains, Puget Sound, and the Great Wheel making slow revolutions on the waterfront pier. 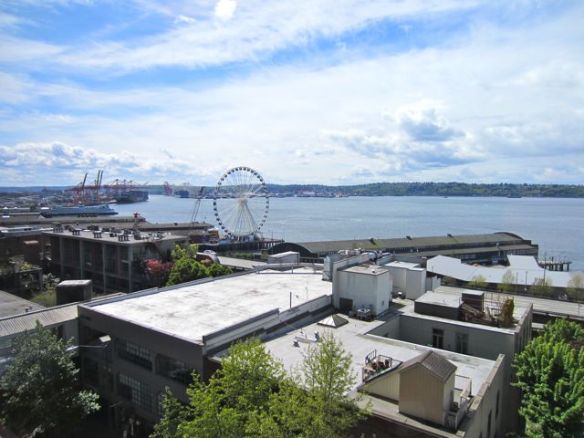 We stumbled upon some cute little places tucked below street level: 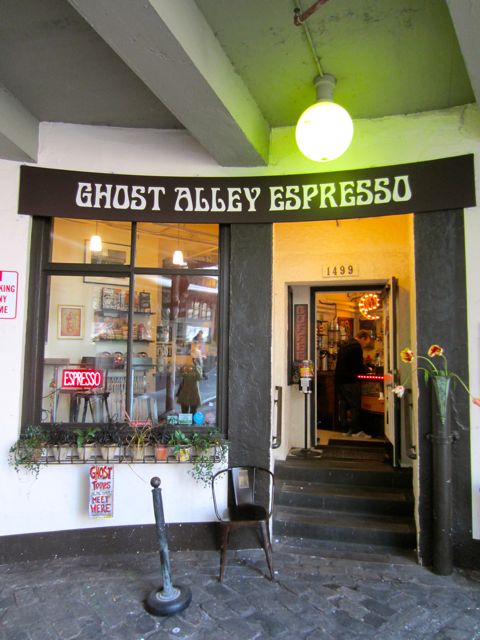 as well as some colourful walls: 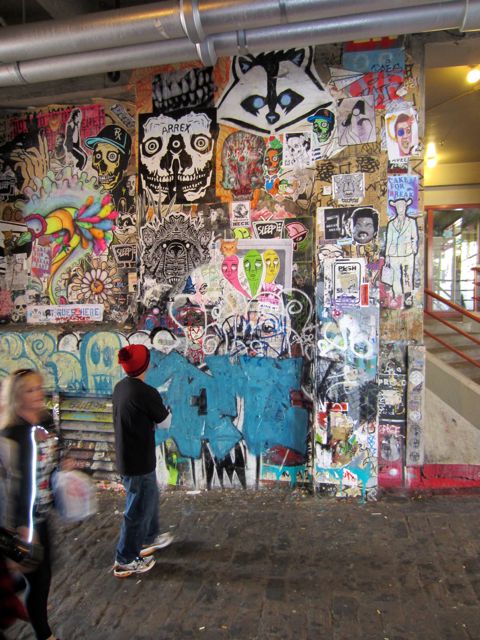 Speaking of colourful walls, this one below almost had me barfing as I walked by. Of course I still took a picture, but it was all I could do not to gag. The Market Theater Gum Wall was named one of the top 5 germiest attractions, and for good reason! It’s inches thick in some places. *shudder* 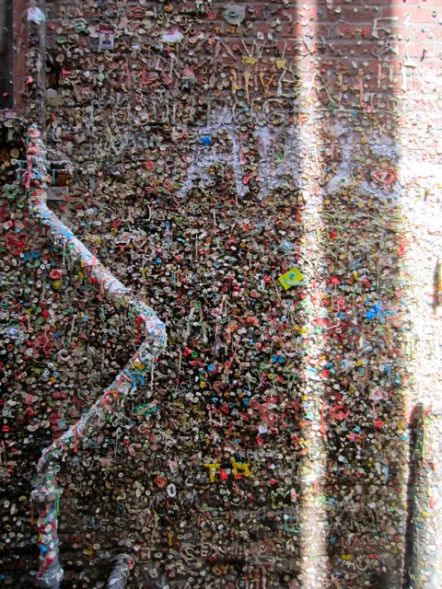 The trip wouldn’t be complete without a photo of the original Starbucks, even though I’m not even a coffee drinker. It definitely looks old and the line-up was too long to even think about joining, but here it is in all its historic glory: 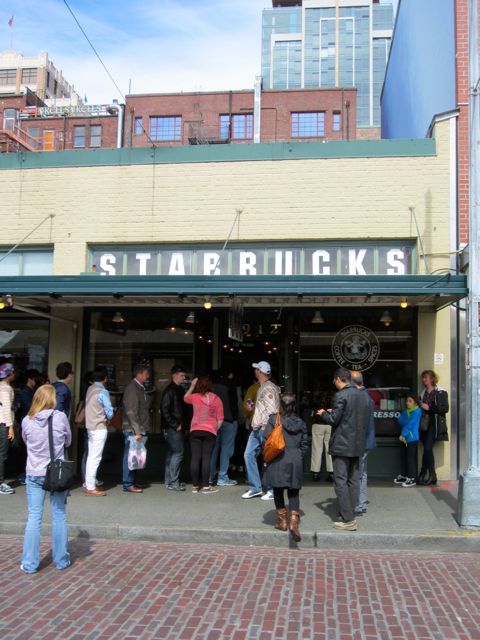 And to end my photographic overview of the trip, here are some shots of the city skyline. In this one, you can see CenturyLink Field way in the background where the Seattle Seahawks play. 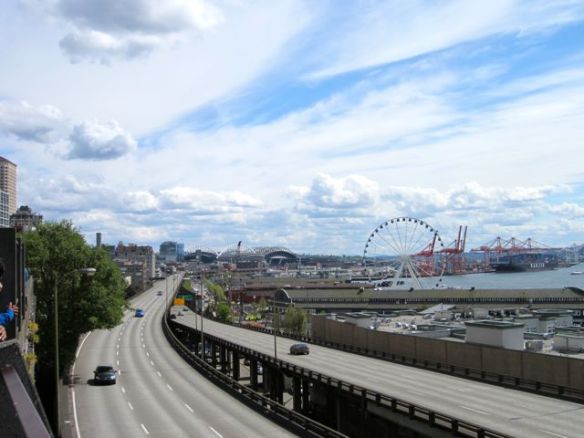 We saw a vendor selling photographs of the city seen through Seattle’s puddles, and decided to try our hand at taking our own shots, which didn’t turn out too badly: 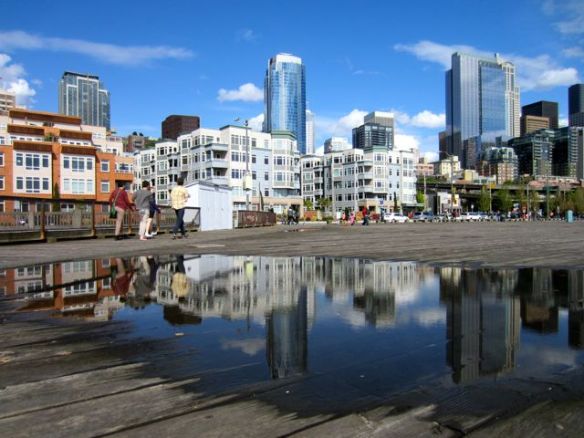 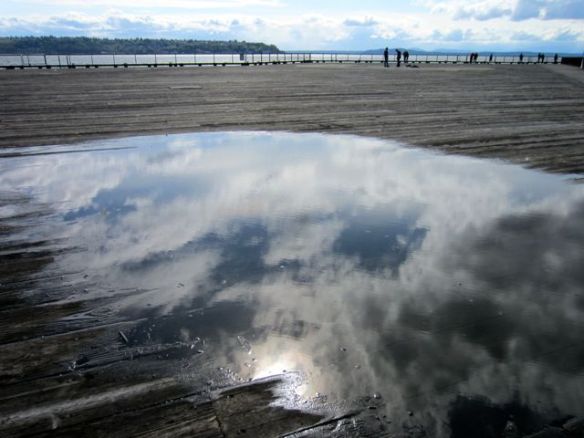 I’m glad the rain held off for my first visit to a city that I would love to explore more of one day. I keep brainstorming “s” adjectives to play off of Sleepless in Seattle to describe my experience there, and the one that comes to mind, as corny as it sounds, is “Smiling in Seattle.” But I think it works. 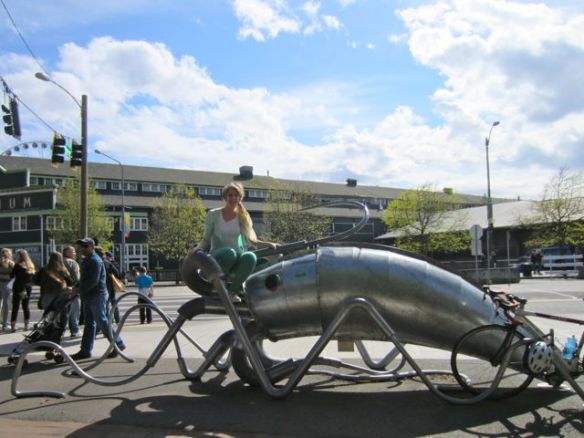 Not only am I smiling, but I’m smiling and sitting on a squid! 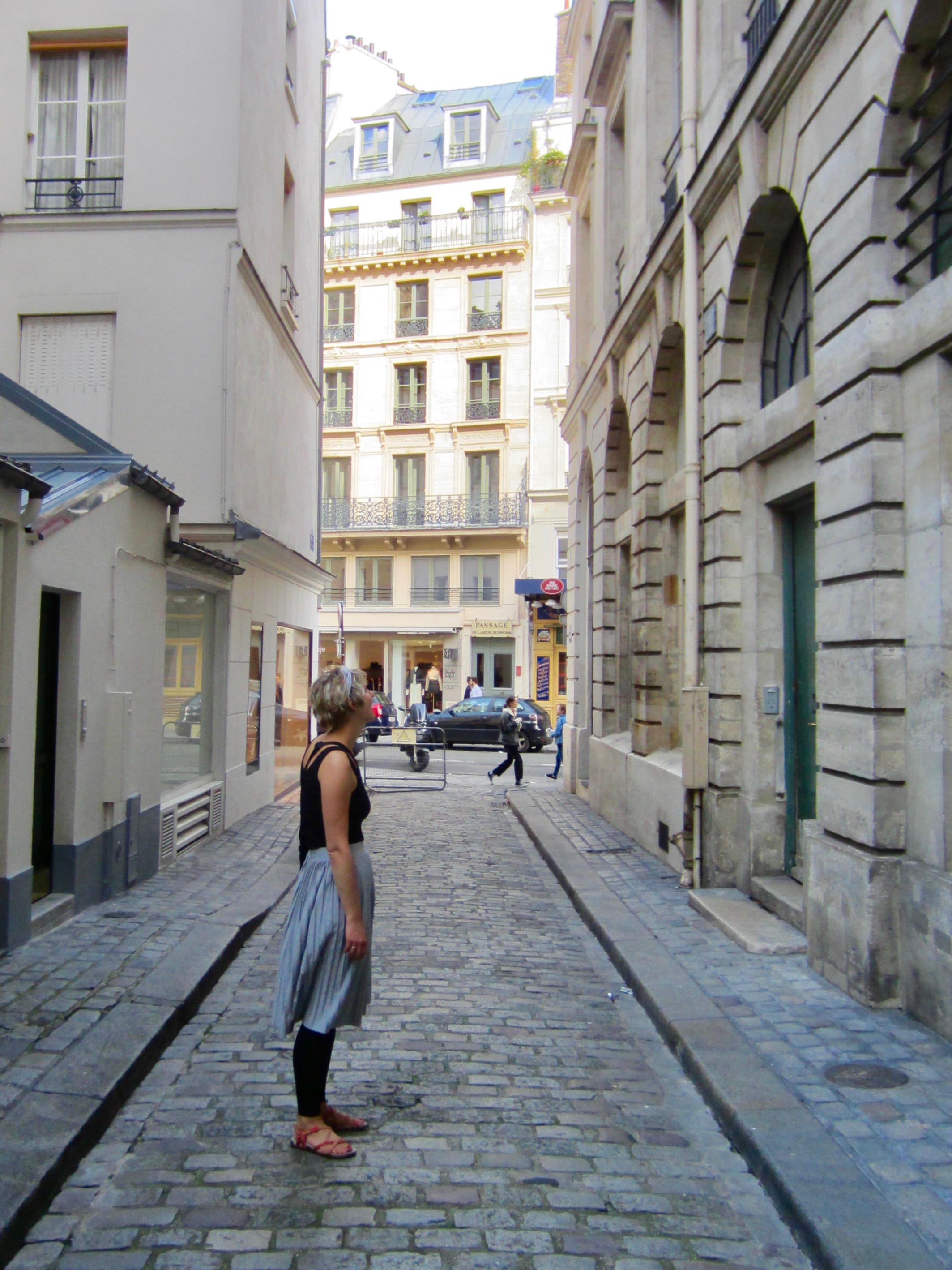