Passing by these neon silhouettes at night, I felt I could have been in New York’s entertainment district, not Vancouver’s Gastown – the oldest part of the city characterized by brick and historic facades rather than modern silkscreen silhouettes that, from a distance, look like they belong on an iPod commercial as they raise the roof.

On closer inspection, they’re actually standing on the shoulders of each other as they reach for the roof (or the sky). Gregory Henriquez, the architect of this condo project at 60 W. Cordova, explains their symbolism: “[The] silkscreen silhouettes of people standing on each other’s shoulders, holding up the building, is a metaphor for rising higher.” He has used visual art and poetry on other buildings in the Downtown Eastside:

The recently finished condo at 60 W. Cordova aims to turn renters into owners for those who have been shut out of the market. A partnership between Westbank Projects Corporation, Vancity, and Henriquez Partners Architects, the project intends to provide affordable homes to people with a Downtown Eastside connection – those who live/work here and desire to give back to their community.

Hence another metaphor for the silkscreen silhouettes – that of support, both physical and figurative. A building needs a sound structure and the support of people to come and stay into existence. It highlights the idea that architecture is a marriage between the hard city (the physical site and materials) and the soft city (the people who begin a building—architects, developers, and the the people who continue it—occupants, community members). This cycle is summarized on Henriquez Architects’ blog as people supporting people.

Even if this metaphor is lost on passersby, the silhouettes at least make great beacons at night showing 60 W. Cordova residents the way home to their stand-out condo.

A one-line poem that repeats for 17 stories by British artist Liam Gillick wraps around the south and east sides of the Fairmont Hotel in downtown Vancouver. The poem reads: “Lying on top of a building the clouds looked no nearer than if I were lying on the street.”

In my About section, I talk about being interested in “architexture” — a conflation of architecture + text. I primarily associate text with books because they are made up of written words, but thanks to postmodernism, “text” can refer to any surface capable of being read, like a painting, a body, a film, a photograph, a dance, a theatrical performance, you name it. I want to give more visual context to the inspiration behind “architexture,” which I wish I could say I invented (and thought I did) until I read an academic article by D.M.R. Bentley in which he also uses the word. Oh the world of academia, frustrating hopes of originality — much like the Internet.

The Fairmont Hotel above and the two buildings below are examples of architexture that triggered my use of the term in my Master’s essay. In other words, my inspiration to discuss the relationship between architecture and literature grew out of walking the city and noticing what was around me, which I’ll flesh out more in future posts. 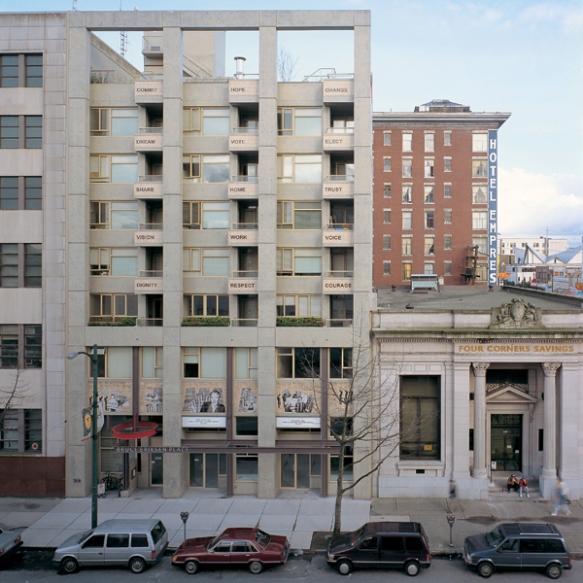 The above two spaces were designed by architect Gregory Henriquez. I love the way he describes his practice: “Architecture is the poetic expression of social justice.” Many of his projects concern social housing such as Bruce Eriksen Place and the new Woodward’s site, which both display this poetic expression. Click on the photo of Bruce Eriksen Place for a better view of the literary balconies that pay homage to the building’s namesake and the community he loved and fought for – the Downtown Eastside. This is also the location of the Woodward’s redevelopment that features a mixed community of users and uses with social and market housing units, civic offices, retail space, an atrium and public plaza, a daycare, and even SFU’s School for the Contemporary Arts.

What strikes me every time I see architexture or literary buildings is their hybridity. We often live such compartmentalized lives — from our different social groups to our living, working, and socializing spaces — that it still surprises me when I see, or rather, read literature on a building. From studying English literature, I’m used to reading it in books. I appreciate when architects take literature out of this traditional context and put it onto a new, arguably more visual text – that of urban spaces we encounter on a daily basis.

Architects aren’t the only ones playing with literary texts. Check out this literary lampstand featured in the Château Laurier in Ottawa:

Architexture surrounds us, speaking through urban spaces (or even furniture in a hotel) not typically given a literary voice. What examples of architexture catch your eye in the city you live in?