I apologize for being MIA on here this past week. I was in Texas where I stared at the domed ceiling of the State Capitol Building in Austin; stood underneath the Gerald D. Hines Water Wall in Houston; smelled the seaweed-infested beaches of Galveston; posed in front of Texas’ oldest dance hall in Gruene; and dropped my mouth at the size of their college football stadiums, fast food drinks, and Buc-ee’s gas stations that look more like a Walmart. 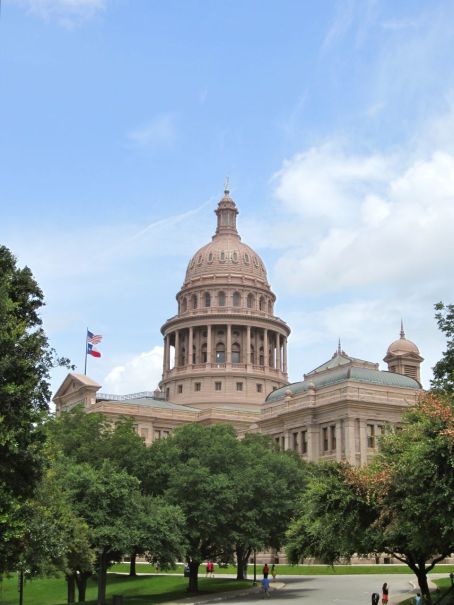 Renaissance Revival architecture of the Texas State Capitol in Austin 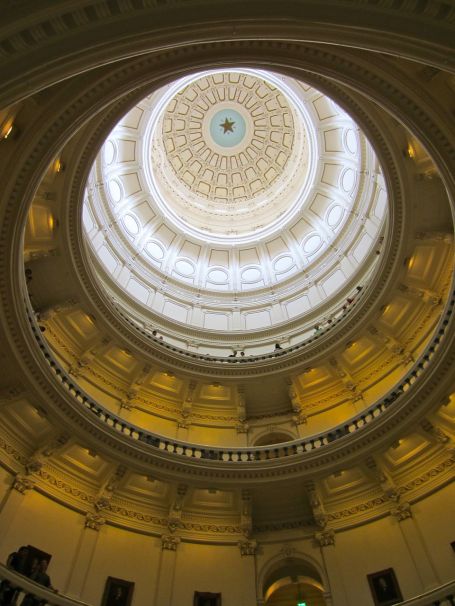 Texas Memorial Stadium at University of Texas in Austin

Before this trip, the furthest south I had been was Oregon. Texas is only a two-hour time difference from Vancouver, but it felt like a completely different (albeit fascinating) world. Many of the stereotypes are true: American flags on houses, stores, and car dealerships, spaghetti-style highway systems (made me appreciate Vancouver’s highway-lessness even more), and big portions of everything, especially food—so much so that there’s even a “Texas size” option on many restaurant menus.

Luckily there were 4 of us sharing these beastly yet delicious onion rings.

I got used to seeing these colours everywhere

But I was also pleasantly surprised at many things—particularly in Austin. Like how green and pretty it is after stopping over in Phoenix, Arizona, and how snazzy their skyscrapers are, like this Frost Bank Tower with its owl-like face:

I loved strolling along Town Lake, experiencing TexMex food, and taking in the plethora of live music acts along Sixth Street competing for your ears and your wallets. Austin is the self-proclaimed “live music capital of the world” and in staying there for a few days, it’s easy to see it’s a hip, artistic, friendly, and vibrant city. Being introduced to Texas through Austin was probably the best and least shocking way of meeting this strange state—although the 33 degree Celsius heat was shocking enough to almost send me running back into the airport. Thank goodness for AC in every single building.

Lady Bird Lake in Austin (but everyone still calls it Town Lake) with a view of downtown skyscrapers. Pretty, eh?

I was also surprised to learn that Austin’s “Keep Austin Weird” slogan was the original city to birth this phrase intended to promote small businesses. This happened in 2000, and Portland followed in 2003. In honour of that slogan that you can find on banners, billboards, bumper stickers, and T-shirts, here are my favourite “weird” Austin photos, most of them from South Congress Street (or “SoCo”) which I would compare with Vancouver’s Main Street, although I think SoCo is even more eclectic.

Called the “grandaddy of all local music venues,” where Stevie Ray Vaughan and other famous musicians played. Opened in 1957.

Yard Dog art gallery featuring American folk art. Allen’s Boots just up the street where I even tried on a few pairs. Not the alligator skin ones shown above though.

View looking downtown from South Congress Street. Can you spot the State Capitol Building straight ahead in the distance?

Austin has a lot of food trucks. Here’s a crepe place in a space shuttle next to an art market.

I’ll write about Houston and the other places I visited some other time, but to finish off this post, I’ll leave you with my favourite weird Austin photo. There are hardly words.

Just in case you weren’t sure which car was yours…