You’ve probably noticed that I haven’t posted as much in the last while. I’m not exactly sure what’s all been keeping me from blogging, but this has been one of them: 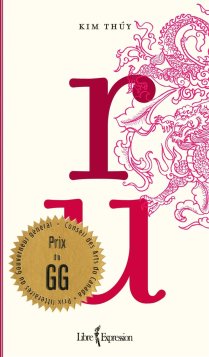 Ru is the début novel of Saigon-born, Montreal-based writer Kim Thúy. It isn’t a very long book (145 pages) and not even all the pages are full of text (the chapters are more like vignettes that read like prose poems). Normally I’d read something like this in about a week, but it took me oh at least 3 times that long because I wanted to read it in the original French. (some French words are éparpillé [scattered] throughout this post so I can try retaining them!).

Ru reads like a memoir, recounting Thúy’s refugee journey at ten years of age, along with her family, from their palatial residence in Vietnam to Canada in 1979. She was a child of war, born during the Tet Offensive. (I didn’t know anything about the Vietnam War before reading this, so I also got a history and cultural lesson all in one). Before arriving in Canada, her family spent several months in a refugee camp in Malaysia. Mixed in this narrative that switches between past and present, memory and history, are vignettes of Thúy returning to her homeland as an adult to work with people from the communist north and capitalist south.

I know I didn’t catch every nuance, but even with my intermediate French, I can say this book is beautiful. In this CBC video interview, Thúy talks about loving words—how her first motivation for the book was to spend time with words. That certainly comes through. I’ve always loved the French language and this book only deepened that affection, which is why I’m going to concentrate primarily on her language in this “review.” 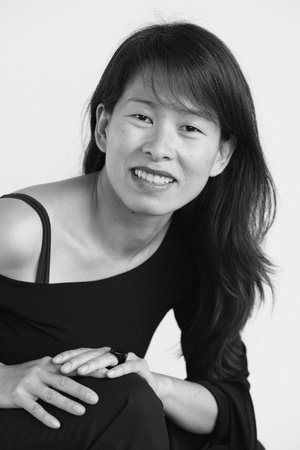 What works so well (and why I could read the book) is because the sentences aren’t complicated or grandiose (though some are long and undulating). She’s not trying hard to be lyrical or emotional. The narrator, in fact, almost has a détachement [detachment] when she describes certain memories, even harrowing ones like a little boy’s death and a mother’s loss. But she’s not aloof with an “I’m too cool to care” attitude. Her prose is simply unadorned, stripped of embellishments and red herrings so the work is on the reader to sort out how we feel. Dépouiller [to strip, skin, undress] is a verb that appears in her story a lot, and it’s a good word to describe her prose. It also fits her journey—stripped of her home, her possessions, her culture, her language that became inutile [useless] once she landed in Granby, Quebec. In fact, Thúy talks about how as a child, she spoke very little, sometimes not all. Her cousin spoke for her, and she was her ombre [shadow].

This witty Vietnamese saying sums up her unadorned life and choice to not own too much stuff:

Only those with long hair are afraid, because no one can pull the hair of those who don’t have any.

Thúy gives tribute to her hybrid identity (Vietnamese and Québecoise) in the epigraph of the novel where she defines what “ru” means:

In French, “rue” means a small stream, and figuratively, a flow (of tears, of blood, or money). In Vietnamese, “ru” means lullaby, to lull.

The book reads as one long “ru” or flow of words. You get a sense of this intention when you read her comments in this Globe and Mail article:

“I didn’t choose to write it or not to write it, or to structure it in any specific way,” she says. “I just wrote, and I followed its internal rhythm. For me it’s one breath.”

(Side note to aspiring writers: what a breath of fresh air to see a book can win awards like the Governor General’s without having a structure!) The book’s description on the Random House website of the English translation plays more on the metaphoric meaning of ru: “the flow of a life on the tides of unrest and on to more peaceful waters.” 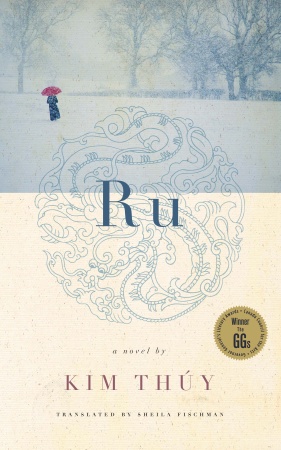 One thing I found myself paying attention to while reading is how many French verbs are taken from their nouns. For example, broom is un balai and to sweep is balayer. Piano is the same in French but the verb to tinkle on the ivories? Pianoter. How sensible is that? My new favourite French verb is papilloner, taken from the noun papillon, which is a butterfly. So what does papilloner mean? To flit from one thing to another. And that also describes how Thúy flits from memory to memory. The book is really one long game of word association where an image like an anchor or red leather will close out one vignette and open the next, even if only loosely.

Here’s an example of her beautiful language. She’s describing her Vietnamese neighbour in Quebec who survived, through writing, the horror of the reeducation camps operated by the Communist government after the Vietnam War:

Without writing, he wouldn’t have heard today the snow melt, the leaves grow, and the clouds go for a walk. He wouldn’t have seen the cul de sac of a thought, the remains of a star, or the texture of a comma.

There are so many evocative lines and reflective anecdotes that I want to gather from this book and share with you (but that might take me another 3 weeks!) Apparently the English translation by Sheila Fischman does it very good justice too.

And how winsome is she when she talks? Soft and rhythmic, comme une berceuse.