A month later, here I am. I haven’t been doing too much reading lately, but this last one was a winner.

I picked up a used copy of The House of Mirth at the recently-opened Y’s Books on Main Street, and started reading it at Queen Elizabeth Park (the day my bike got a flat tire). I love Edith Wharton novels so it wasn’t a surprise that this one also captured me. 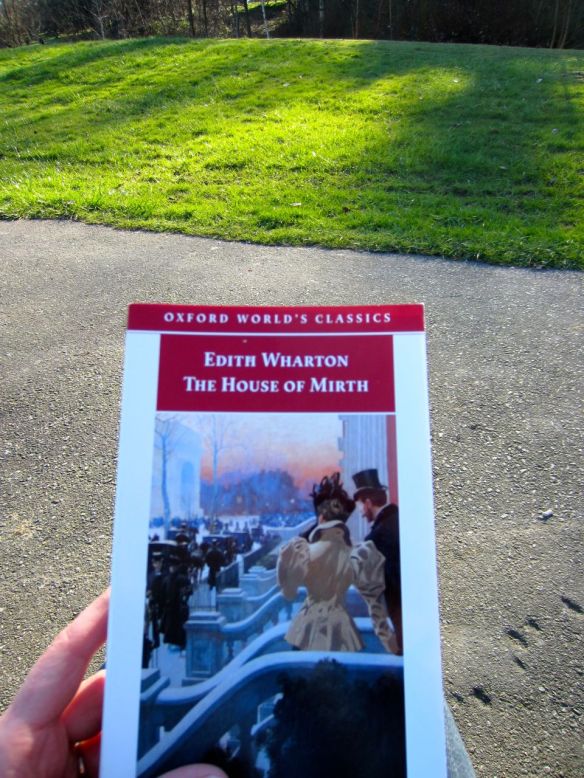 The main character, Lily Bart, is beautiful, well-bred woman in the upper echelon of New York society in the early twentieth century. The problem is, she is unmarried at 29 and has no money to her name. She must secure a man with a fortune so she can survive in the society she wants to continue to enjoy. However, her proclivity for gambling & expensive tastes lead her into more debt & bad decisions. She becomes a tragic heroine.

What makes Lily Bart such an interesting “heroine” is that she’s not particularly likeable or easy to sympathize with. As a money-conscious reader in the 21st century trying to make it in one of the world’s most expensive cities, Lily’s thoughts about how awful her aunt’s draperies are didn’t really resonate with me. But, where I think the genius of Edith Wharton comes into play is that even though I couldn’t empathize with Lily’s lavish tastes & subsequent woes, I felt Wharton fleshed out her character so well that I could understand why these upsets would be so distressing to her, even though they weren’t to me. And I think great writing can make a reader feel for the character, even one they don’t really love.

While reading it, I was really fascinated by Lily’s name because I know authors never choose these things lightly, especially in the era Wharton was writing (House of Mirth was published in 1905). “Lily” is such a beautiful but fragile name, like the flowers. And like Wharton’s main character. A beautiful woman with perfect poise and grace, yet swayed with every passing wind.

I was dissecting my thoughts on her name to the Artist, and he brought up an interesting connection. “Where else do lilies get mentioned—in the Bible?” The wheels were turning. Ah ha!

Therefore I tell you, do not worry about your life, what you will eat or what you will drink, or about your body, what you will wear. Is not life more than food, and the body more than clothing? 26 Look at the birds of the air; they neither sow nor reap nor gather into barns, and yet your heavenly Father feeds them. Are you not of more value than they? 27 And can any of you by worrying add a single hour to your span of life? 28 And why do you worry about clothing? Consider the lilies of the field, how they grow; they neither toil nor spin, 29 yet I tell you, even Solomon in all his glory was not clothed like one of these. 30 But if God so clothes the grass of the field, which is alive today and tomorrow is thrown into the oven, will he not much more clothe you—you of little faith? 31 Therefore do not worry, saying, “What will we eat?” or “What will we drink?” or “What will we wear?” 32 For it is the Gentiles who strive for all these things; and indeed your heavenly Father knows that you need all these things. 33 But strive first for the kingdom of God and his righteousness, and all these things will be given to you as well.

34 ‘So do not worry about tomorrow, for tomorrow will bring worries of its own. Today’s trouble is enough for today.

As an aside, who knows if this allusion was in Wharton’s mind or not, but if I was in grad school again, I’d write a paper making this connection and linking it to how many times her appearance is mentioned as “veiled”. Lily’s name was a reminder of what she already had and didn’t need to strive for. But she kept striving anyway. Striving after men, money, and a good position, betraying her own heart along the way. But even when she almost seals the deal on a man, she calls it off or discreetly runs away.

“That’s Lily all over, you know: she works like a slave preparing the ground and sowing her seed; but the day she ought to be reaping the harvest she oversleeps herself or goes off on a picnic.”

Mrs. Fisher paused and looked reflectively at the deep shimmer of sea between the cactus-flowers. “Sometimes,” she added, “I think it’s just flightiness—and sometimes I think it’s because, at heart, she despises the things she’s trying for. And it’s the difficulty of deciding that makes her such an interesting study.”

I think that’s one of the best lines in the book: “She despises the things she’s trying for.” And what a commentary this is on the society that bred her. It’s a bitter twist of fate when the woman who is raised to wear the best dresses & vacation in luxurious places is refused by the society that created her.

By the end, yes, there is sympathy for Lily Bart. At the end of the novel when she goes over to the home of a working-class girl in a tenement area of New York and makes the following remarks, the reader knows, “Okay, this is a different Lily. A wiser Lily whose veil has been lifted and who relearns her understanding of frailty, permanence, and of what it means to have a home and be at home in the world.

The poor little working-girl who had found strength to gather up the fragments of her life, and build a shelter with them, seemed to Lily to have reached the central truth of existence. It was a meager enough life, on the grim edge of poverty, with scant margin for possibilities of sickness or mischance, but it had the frail audacious permanence of a bird’s nest built on the edge of a cliff—a mere wisp of leaves and straw, yet so put together that the lives entrusted to it may hang safely over the abyss.

On a side note, the theme in this novel loosely reminded me of this song I am kind of in love with: