I really should know this place better, seeing that it was recently named world’s best park by TripAdvisor.

Beating Central Park in New York City is no small feat. Who would have thought Stanley Park is BIGGER than Central Park? It certainly doesn’t look like it on a map, but then again, it is hard to compare a circle to a rectangle. The figures are 1000 acres to 840, so not a huge difference, but significant nonetheless.

I’ve cycled the Seawall a few times—that scenic 22 km path that wraps around the Park, but even tourists do that. It’s so easy to stick to the outskirts of this city, maybe because everybody thinks the beauty lies between ocean and city. A liminal place. And don’t get me wrong, it is beautiful.

But I don’t just want to stick to the edges anymore of what urban theorist Lance Berelowitz calls an “edge city.” He says Vancouver is a bit odd insofar as we don’t have a central public square like most traditional European cities. Vancouver’s public space is the beach, which is always on the verge of disappearing. We are an edge city in other ways too—East meets West, a Pacific Rim city that attracts many Asian investors who buy condos but don’t occupy them or only occupy them once or twice a year, leaving many beautiful but empty buildings in this city of glass/city of ghosts. 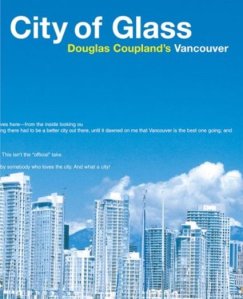 Douglas Coupland talks about this problem in the above book. And it is a problem when it comes to creating dynamic, vibrant neighbourhoods. People actually need to be present.

But I digress. Back to Stanley. I made my way from the edge to the centre this weekend so I could get to know what great discoveries lay hidden to those seeking a little deeper. I wanted to immerse myself in its forests and trails. And immerse myself I did. So much so that it took a couple from San Francisco to help reorient me. Ah, the irony! But I’m going to enjoy those moments when I’m lost in my own city because the longer I live in a place, the less likely it will occur, and I kind of like the feeling of, “Where am I and how did I get here?”

So here’s what I would have missed if I had not ventured towards the centre.

The Painters Circle. Gorgeous canvasses by local artists who sit here every day selling their paintings. One of them, Tim Fraser, paints Vancouver’s Seawall in abstract form:

“One of the reasons I started painting the seawall and the park was because I felt a lot of people were missing out on it,” he says. “Stanley Park is a different kind of park in the mornings. It’s beautiful and empty.” [note those two adjectives again]

Lord Stanley. What a great posture to have immortalized in stone. Come, welcome, enjoy! Arms open, delivering a celebratory speech or embracing for a hug. There is joy in this image. By the way, this is the same Lord Stanley (previous governor general of Canada) for whom the Stanley Cup is named after, in case you were wondering.

Beaver Lake. It looks more like Beaver Meadow, but apparently the City has plans to restore it. You have to look hard to see it, but there is water under all those weeds, grass, and lily pads. No sign of beavers though.

Robert Burns. A poet in a park. Reminds me of the Mall and Literary Walk in Central Park, where I also saw his image.

Klahowya Village. Experience the First Nations history of Stanley Park, where many Aboriginal peoples lived in villages before being moved to settlements between the 1870s and 1920s. Signs of their presence pop up all over the park, including a section of large totem poles. 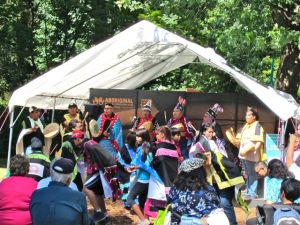 Lost Lagoon. Get lost in its wild beauty. I had read about it many times in Stanley Park by Vancouver author Timothy Taylor, but had never visited it before. Now I want to re-read the book because I am that much more aware of references and spatial relationships in the Park. 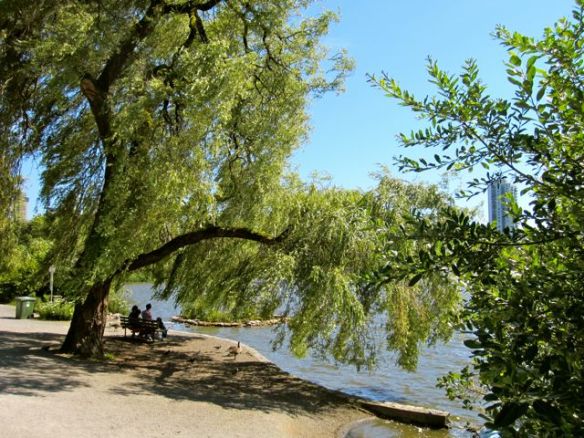 Here’s the opening, which highlights the importance of place in the novel:

They arranged to meet at Lost Lagoon. It was an in-between place, the city on one side, Stanley Park on the other. . .

Now Jeremy lit a cigarette and watched an erratic stream of homeless people making their way into the forest for the night. When he arrived there had been seawall walkers and hotdog eaters, birdwatchers, rollerbladers, chess players returning from the picnic tables over by bowling greens. Then lagoon traffic changed direction like a freak tide. The flow of those heading back to their warm apartments in the West End tapered back to nothing, and the paths were filled with the delusional, the alcoholic, the paranoid, the bipolar. The Professor’s subjects, his obsession. The inbound. Four hundred hectares of Stanley Park offering its bleak, anonymous shelter to those without other options.

You’ll learn a lot about Vancouver’s history and folklore in this book, as well as what it means to be “rooted” in place from a geographic and culinary context. Yes, foodies will love it, as well as those with a penchant for mysteries. I had to keep reminding myself this book is fiction, because if it were true, it would be Vancouver. Now on that suspenseful note . . .

If any of you local or faraway readers want to help celebrate Stanley Park’s history, come visit August 24-25 when Vancouver will host a 2-day party in honour of the Park’s 125th birthday. See for yourself what life on (and off) the edge is all about!

1 thought on “Getting to Know Stanley”