Valentine’s Day is fast approaching, and if you’re looking for a quirky, indie-type film about finding love in the age of urban alienation, I recommend Sidewalls (2011). It’s in subtitles. I’m not just recommending it for couples — in fact, I think it appeals more to those who often find themselves on the outside looking in when it comes to love. Like the store windows Mariana designs and displays her mannequins in, the film navigates that lost space between inside and outside where you don’t really know what space you want to stand in and commit to. You want the city to see you but you also want it to swallow you.

I knew nothing about Buenos Aires before watching the film. I still don’t know much, but I did learn that it is a poorly planned city, a hodgepodge of architectural styles that looks like a blindfolded kid was handed way too many pictures and not enough cardboard and was told to make a collage. Just glue them all down!

Next to a tall one, a small one.
Next to a rational one, an irrational one.
Next to a French one, one with no style at all.
These irregularities probably reflect us perfectly. A esthetic and ethical irregularities. These buildings, which adhere to no logic, represent bad planning. Just like our lives:
We have no idea how we want them to be. We live as if Buenos Aires were a stopover. We’ve created a “culture of tenants”. (Martin)

the sidewalls between Martin’s and Mariana’s apartment buildings

There’s one way out of the oppression that results from living in a shoebox. An escape route: Illegal, like all escape routes. In clear violation of urban planning norms, there are a few tiny, irregular, irresponsible windows that let a few miraculous rays of light into our darkness. (Mariana) 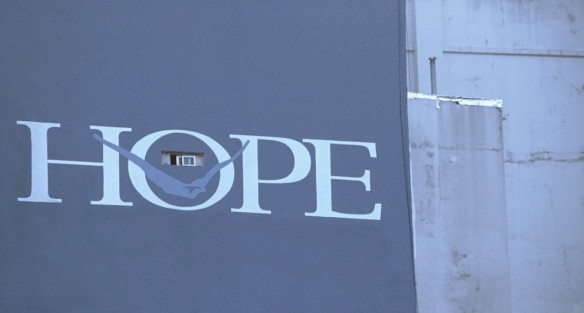 Martin and Mariana live in next-door apartment buildings and are perfect for each other in a city where they keep meeting other people who aren’t perfect for them. The only problem is Martin and Mariana have never met. A sidewall (medianeras) between their buildings separates or connects them, depending on which way you look at it. 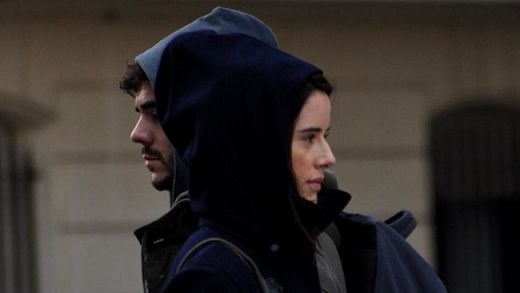 I responded to the film with a poem. It probably only makes sense if you’ve seen the movie and, if you have seen it, you’ll recognize some lines taken directly from it:

a leaning tower of pizza

there is no view

behind this curtain of concrete

you find him at the airport, at the beach, at the mall,

but never in the city

how can you find a person when you don’t know who you’re looking for?

are his red and white stripes

these power lines connecting us

we don’t use anymore

we slip in and out by the sidewall

Don’t let my poem mislead you though – watch the film yourself. And on the subject of side-by-side lives, check out this piece.