October 23-30 – the dates I was in New York, almost a year ago now. Whenever anniversaries of big life events come around, I like to revisit their time and space.

I recently re-read The Great Gatsby upon finding this hardcover edition at my favourite used bookstore in Victoria. 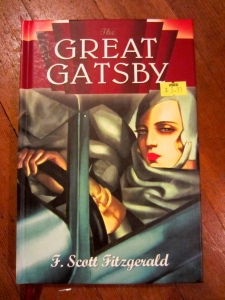 I began to like New York, the racy, adventurous feel of it at night, and the satisfaction that the constant flicker of men and women and machines gives to the restless eye. I liked to walk up Fifth Avenue and pick out romantic women from the crowd and imagine that in a few minutes I was going to enter into their lives, and no one would ever know or disapprove. Sometimes, in my mind, I followed them to their apartments on the corners of hidden streets, and they turned and smiled back at me before they faded through a door into warm darkness. At the enchanted metropolitan twilight I felt a haunting loneliness sometimes, and felt it in others – poor young clerks who loitered in front of windows waiting until it was time for a solitary restaurant dinner – young clerks in the dusk, wasting the most poignant moments of night and life. – F. Scott Fitzgerald

I also re-read it so I could compare Fitzgerald’s 1920s New York to Amor Towles’ late 1930s New York in Rules of Civility, which I was reading with my book club. 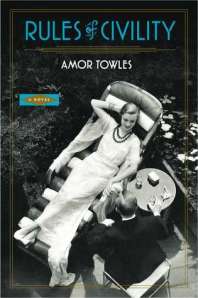 Fitzgerald’s protagonist is male; Towles’ is female. Neither book could take place in any other city in their respective times. Filled with young people and deceptive appearances, their characters climb social ladders and never cease to be invited to party after party after [really? I can’t believe what drives the plot of this novel is another] party. But then again, The Great Gatsby explores the Roaring Twenties and the disillusionment after WWI. The Rules of Civility explores the hopes and ambitions of two fiercely independent best friends still trying to make it in very much a man’s world in 1938 through whatever it takes. Towles’ book isn’t the kind I highlighted for profound or insightful phrases (the fact that it was a library book hindered this possibility anyway), but I liked it just the same.

Yet as much as I read New York, I could never exhaust it. The city gives more than it takes, and it gives something different each time. 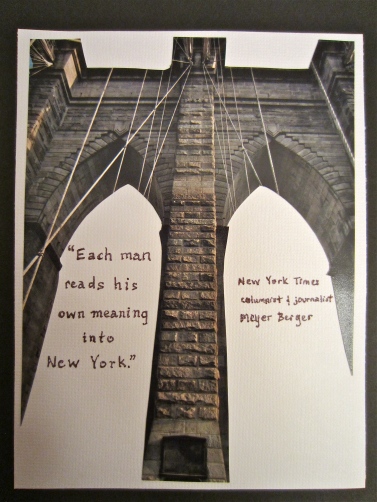