1. peaceful in character or intent

2. of or relating to the Pacific Ocean

that encroach on me

and my sandy patch of safety,

the rhythm of the waves rocks me to sleep regardless. Finally—

the coming in and going out

the opening and closing

the rising and setting of twenty-four hours—

letting me know: it is finished.

another day to pack away, another tide to turn

Put to bed the accusations I carry

the arguments that tarry

the resentments I marry

Resurrect the hope I bury

the joys I hurry

the future I rob with worry

Threaten, thresh, thrall me with your pacific love.

“Deep calls to deep in the roar of your waterfalls; all your waves and breakers have swept over me” (Psalm 42:7)

I spent last week in the Pacific Ocean — not the entire week, but a good portion of it – swimming, snorkelling, surfing in it; lying beside it, accompanied by my new e-book reader I got for Christmas, which, I must say, I really love, especially when travelling.

My family took a vacation to the island of Oahu, our first family vacation since I was twelve or some age like that I barely remember, and my first tropical destination.

I know that in this blog I set out to read the city and its various textures, but this vacation was more about reading and relaxing in the city/on the beach, so that’s why the genre of this post is less critical and more travelogue. That being said, here are some shots of the various textures of Hawaii: sand, beach, ocean, palm trees, plants, volcanic craters, and Honolulu skyscrapers. 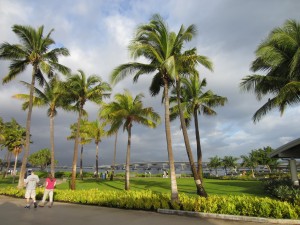 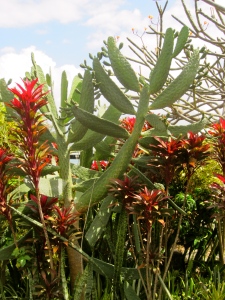 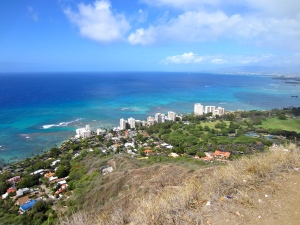 View from Diamond Head. Only takes about an hour (round trip) to do this hike and get a great view of Waikiki and Honolulu 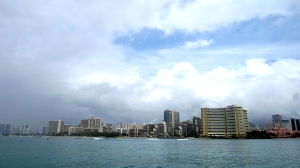 Honolulu skyline from a catamaran

I read George Eliot’s Victorian novel The Mill on the Floss about brother and sister Tom and Maggie Tulliver before heading to Hawaii. One of the reasons why I enjoy Victorian novels so much is confronting new words that I’ve never heard of before that I like to try and weave into my everyday speech (though I have yet to be successful with “tergiversate”). One such word was “pacific“:

“Both the men now seemed to be inquiring about Maggie, for they looked at her, and the tone of the conversation became of that pacific kind which implies curiosity on one side and the power of satisfying it on the other.”

I have never heard or seen “pacific” used in this way before. I always thought it only referred to the Pacific Ocean, but apparently it also means “peaceful in character or intent.” I guess that makes sense considering similar words like pacifism and pacifist. Have you experienced the phenomenon of being introduced to a word for the first time, and then seeing it crop up everywhere? Well, I’m exaggerating slightly because “pacific” didn’t quite crop up everywhere, but it is a key part of this song by Graham Colton that kept coming up on my iTunes shuffle playlist: 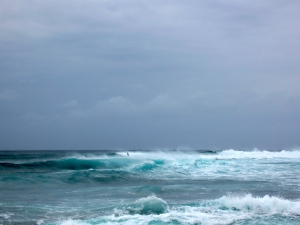 Pacific is my new favourite word — I like that it refers to both a place and a quality or condition – being at peace. Hawaii is a pacific place in both senses of the word. Given this locational inspiration and my encounters with the pacific in my reading and listening, I felt compelled to try and write a poem teasing out these meanings. The result is at the top of this page.